“Shane is only a western in the same way as Romeo and Juliet is only a love story.”

The line is delivered by Robert Stevens Jr on the commentary that accompanies the dvd of the film. His co-commentator Ivan Moffat (associate producer of Shane) is pleased with it and wants to know where it comes from. It’s just something I heard or read somewhere, says Stevens. Even with the power of modern search engines, I can’t track it down. Somebody ought to claim it. 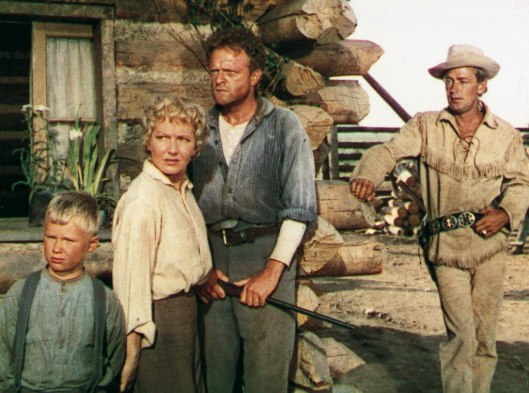 Most of the cast were chosen because they were available B-listers, on Paramount contracts, or up and coming stage actors. It was a rare diversion in 1951 for western film-makers to leave the deserts and prairies and head for the mountains of Wyoming. It runs counter to most of the successful westerns of the forties and fifties in portraying its cattle baron and its gunslingers as anachronisms in a changing world. Its tiny lead actor needed to stand on a box so as not to look stupid next to the rest of the cast. It has an annoying wide-eyed little shit of a boy dominating many of the most important scenes. The tiny actor wins two extended and difficult fist fights against cowboys twice his size and strength (the second against a whole gang of them). The hero’s mysterious quick draw gun slinging is so ropey that it requires a hundred takes to get it right. (In the final shoot-out Alan Ladd blinks as he shoots…not once but twice). Ladd was so awkward with a gun that he later failed in a suicide attempt that left him both bloody and bowed. He said it was an accident in that he accidentally survived. The otherwise brilliant Jack Palance is portrayed as panther-like and assured with horse and gun yet is actually so awkward on a horse that he has to enter town walking after he consistently fails to manage the scene at a gallop, and is so inept at getting on a horse that the director has to reverse the film of him dismounting it in order to get him back in the saddle again. On top of that the director’s acclaimed attention to detail allows a modern highway to be clearly visible in the opening shots and in a key scene half-way through the film a truck can clearly be seen driving across the background as Shane explains to little Joey why he doesn’t wear his six-shooter any more. O, and the romantic leading lady is being played by a woman in her fifties and baddy number three is being played by a US Treasury Department Official. 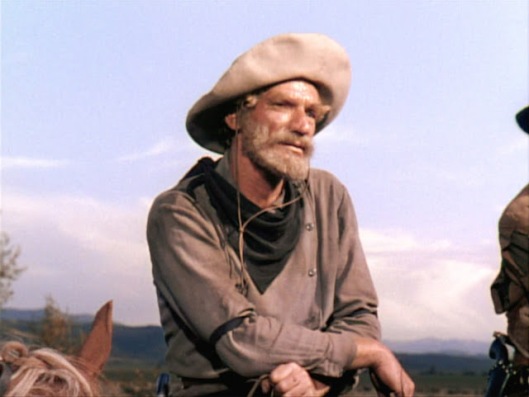 How on earth did all of this result in a film that is consistently voted one of the ten best westerns ever made and one of the top hundred films of any genre? Woody Allen loves it, Sam Peckinpah worshipped it and cited the way it used guns as a major influence on his own brand of realism. Martin Scorcese is a huge fan. I came with low expectations and after ten minutes was wondering if I wasn’t watching a better film than The Searchers. And I’m not at all sure if I can explain why. I’m not the only one.

For Christopher M Jones “No amount of beautiful scenery can make up for this kind of tedious, bone-headed moralizing. I don’t think it’s any coincidence that the villains are the most interesting characters in the film and that Joey is the most obnoxious child in the history of anything. This film is so grotesquely wholesome it could feed a family of 5 for a year.”

Whereas Charles Coleman finds it “One of the best westerns ever. Great mini-triangle drama between the adults in the family in the midst of a good guys vs. bad guys western. The kid is great. The music is wonderful and the locations/cinematography are too beautiful for words. Great film.”

(Both quotations from MUBI web-page on Shane)

I agree with them both. It’s brilliant while often running close to the borderline of dreadful. It is a must see film.  It may be riddled with faults and weaknesses but like Mirabell of Millament in Congreve’s Way of the World, we love it all the better for its faults.

Shane doesn’t deal directly with the Johnson County Wars (see future post on Heaven’s Gate for more detailed background on the Johnson County Wars.) but the history and tensions between cattle ranchers and homesteaders are the same. Director George Stevens wanted to locate his telling of the story in a place that was  huge and cramped at the same time. A place that was both open range and enclosed by nature. He found it 370 miles west of Johnson County in Jackson Hole Wyoming and, in setting his film here, made the location second only to Monument Valley as the place most associated with the West in the minds of movie goers. 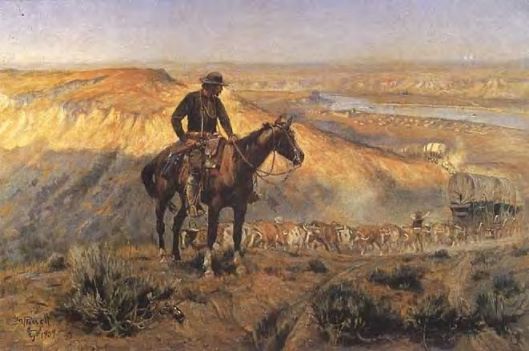 The West we see in films was created by directors and cinematographers. Very few significant, historical events took place either in Monument Vally or Jackson Hole. Neither are conducive to successful farming or ranching and no railroad runs through them, no battles took place and no gangs of outlaws used them as their hide-outs. But both look good on the screen. Stevens (and indeed John Ford) were well versed in the visual art of the west. Both were admirers of artists such as Charlie Russell and Frederic Remington who captured the true west two generations earlier. Russell’s protege Joe De Yong actually travelled around with Stevens (and is credited as technical advisor on the film) and it was he who brought the director to this elevated valley. (See 100 Greatest Western Movies of all Time Published 2011 Morris Books).

Jackson Hole got its name in a curious manner. The Jackson part didn’t arrive until 1893 when a settler named Margaret Simpson needed an address for her mail to be sent to. (See Wikipedia) She named the town after a mountain-man who may well have been the fellow who applied the “Hole” part of the name. Hole being a trappers’ name for the sort of a valley you approach by dropping down a steep slope. Such a view and such an approach to the valley is provided by the opening (credit) shots of the film as Alan Ladd enters the screen from the left and makes his way on horseback down a rocky slope with the entire valley (including the Teton Highway just visible) spread out below. The Rocky Mountains surround the plain, providing spectacular backdrops from every angle, the most spectacular, and the most often used by the film crew, being the Grand Teton range to the north. 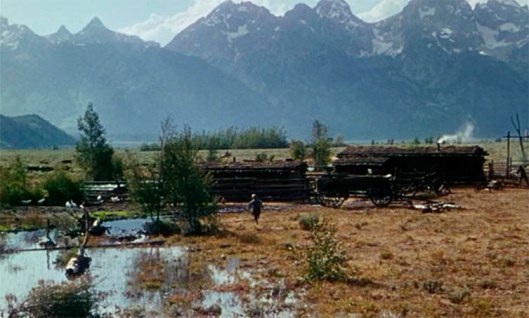 The Grand Tetons provide the background to the Sharrett’s cabin

As spectacular as these mountains are in reality as they soar 7,000 feet above the valley floor to their classic pyramidal peaks, they were just a little too far away for their scope and immensity to be appreciated by the camera. That is until cinematographer Loyal Griggs swapped his normal camera lenses for telescopic affairs. The characters and their cabin remained firmly in the foreground but suddenly the Tetons looked as though they rose straight up from behind the rail fences of the paddock. Not all shots are made with telephoto help and the observant can amuse themselves through the picture watching the mountains move backwards and forwards from towering and immediate to much less impressive in the distance. It’s not a mistake. George Stevens was a careful and intelligent director. As well as wanting to have the homesteaders enclosed by the fearsome power of the Tetons he wanted to give a sense of the vast emptiness of the west and of how lonely and far away from civilisation the Starrett’s home was.

The contrast between the flat green and browns with its clear, silvery-blue streams, of the valley and the snowcapped peaks is used as a visual metaphor throughout the film in different ways. Regardless of this, there is no doubt that despite the appropriateness of the setting to the story, Stevens and his crew were more than happy to add the spectacular wow! factor that proximity to such a magnificent landscape adds to the film. Philip French in his book: Westerns: Aspects of a Movie Genre points out that in inferior westerns, “the landscape is simply there to be admired,” adding pointedly, “which is not acceptable”.

The landscape in Shane is certainly there to be admired for its own sake. An audience would have to be severely de-sensitised not to be impressed but it serves many other purposes; from  the buckskin-clad hero almost floating down the mountain on his horse in the opening credits, like something ethereal descending from above, to the way the magnificence of the natural setting throws the petty achievements and squabbles of the people into perspective. 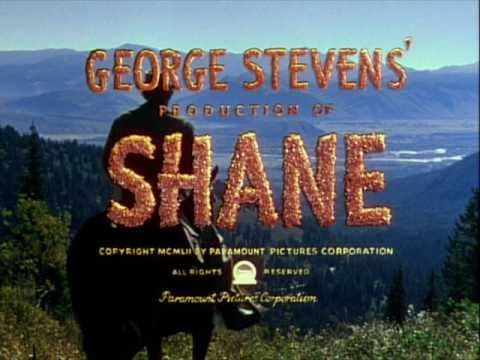 The film is set in 1890 and by then most of the productive land, west of the Mississippi, had been taken. Ranchers and homesteaders competed for claims that gave up very little for a great amount of hard labour. There are no signs of any growing crops except a tiny vegetable plot near the Starrett’s cabin which would barely keep the family in lettuces for a month. Less so after being trampled by Ryker’s horsemen and nibbled at by a deer. It doesn’t strike you at first, despite huge shots of the landscape from several different angles, but there’s barely a tree to be seen. There obviously had been trees; the Starrett’s home is a log cabin, as are the other homes in the movie and the few buildings in the town are all made of timber. It’s one image among many that show that there is a limit to nature’s bounty and that any living from this land is going to be a tough one. The effect is all the more striking given that the land had been first settled by Europeans less than twenty years earlier. This isn’t an ecological western but it presaged that sub-genre.

The rivers look clean and fresh. Water doesn’t appear to be a problem, though Ryker complains that homesteaders have irrigated away vital water from his cattle pastures. Rivers and three spindly trees, that form a sort of symbolic archway into the town, provide the geography of the the narrative of the film.

The whole is filmed with the touch of an artist. The Technicolor used makes it possible to date Shane to within a year of its release. The colours are not subtle but the effects created by cameraman and director working with a magnificent environment are both subtle and beautiful. My only quibble with the camera work is in close-ups. These portraits, notably of Shane and of Little Joey, are almost still images that hold the screen for longer than you think they should. They stand out. They jar. But they work! They should be awful but in fact they add enormously to the film. You just wouldn’t want them as posters or photographs on your wall. They’d drive you mad. 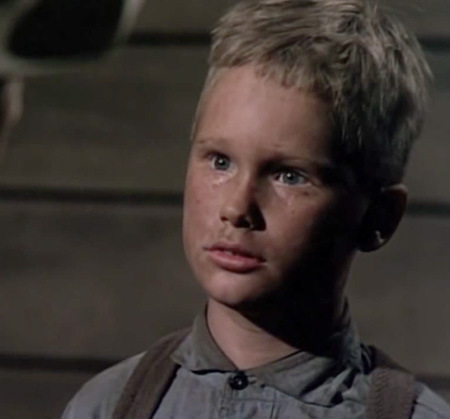 The mountains contain this world and keep everything else on the outside. At one point one of the cowboys points out that the law is 2 days ride away (4 days there and back). And that’s over some of the highest mountain passes on the continent. If Greek drama is being invoked, as it so often is by western film makers, then the Starretts and the other homesteaders are the Thebans, Ryker’s men are the threatening army and the rest of the world are distant aliens. The audience are told little of this distant world except that that is where Shane rode in from at the beginning of the film and where he is riding away to at the end. The mystery will always be what lies on the other side of the mountain. Shane is more than mysterious. 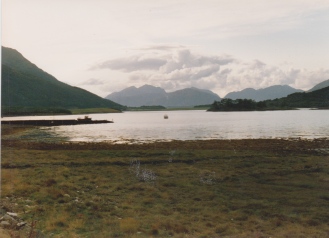 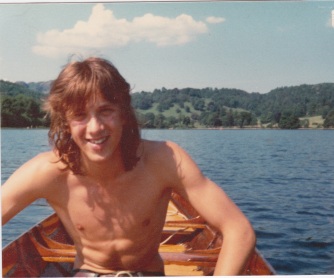 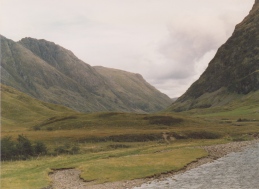 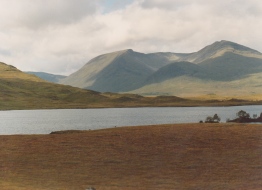 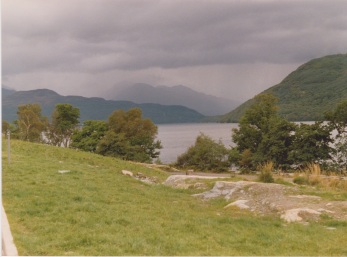 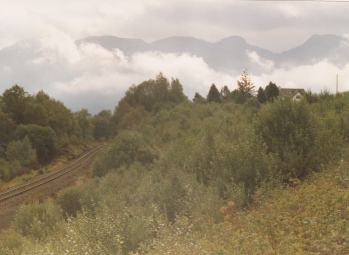 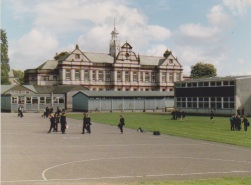 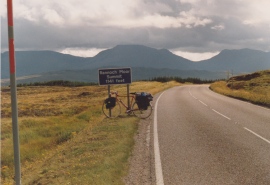 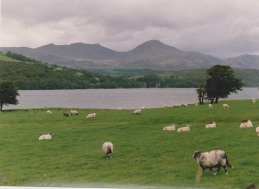 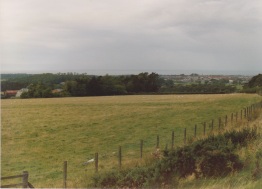 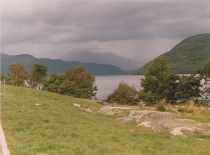 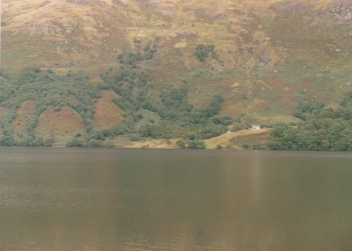 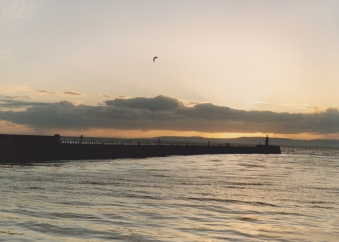 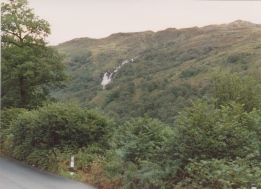 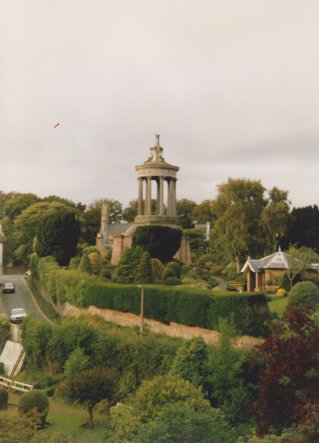